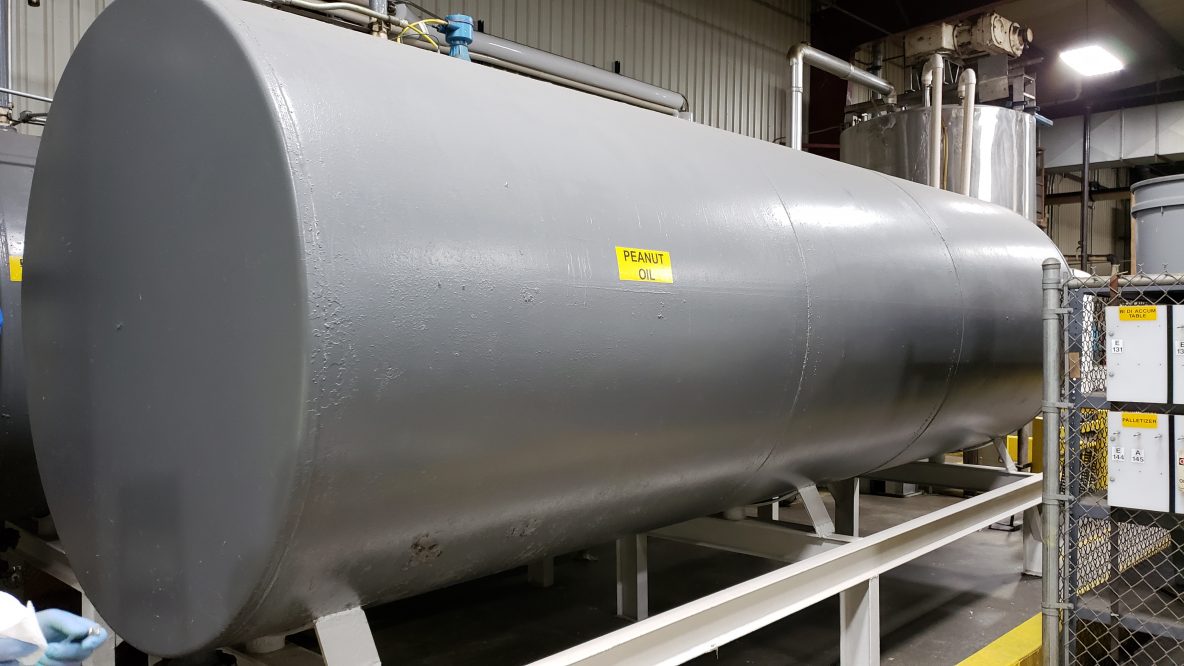 Spill Prevention, Control, and Countermeasures (SPCC) regulations require all owners and operators of aboveground storage tanks to maintain and periodically inspect their tanks if the total storage capacity at a facility is greater than 1,320 gallons.  Our client stores 8,600 gallons of peanut oil as part of its peanut butter production process.  The oil is stored in two steel tanks and two fiberglass reinforced plastic (FRP) tanks housed inside the production facility.  All four tanks required routine inspection for regulatory compliance.

TSP arrived at the site to perform STI SP001 inspections of the steel tanks and SP001 inspections with UltraAnalytix™ of the fiberglass tanks.  Because the tanks were installed in the food production area, TSP staff were required to comply with the hygiene standards at the plant.  Our testing equipment was cleaned specifically for this project and our staff received training in the unique requirements for food safety.

Inspection began with the 3,000-gallon horizontal steel tanks.  TSP’s inspector performed an external visual inspection of both tanks and completed the SP001 Annual Inspection Checklists.  Ultrasonic thickness (UT) measurements were then collected from 44 points per tank in order to establish corrosion rates.  Additional UT scanning was performed in areas where internal pitting was most likely to occur.

FRP tank inspections also began with external visual inspection and completion of the SP001 Annual Checklists.  Inspection staff also completed UltraAnalytix™ Inspection Checklists which are specifically designed for fiberglass assets.  An ultrasonic flaw detector was used to collect 30 readings from critical areas of each tank’s shell for analysis and computation of the tank’s remaining strength.

Finally, TSP made brief observations of the pumps, valves, and piping associated with all four tanks to verify that there were no apparent leaks or signs of damage. TSP provided final inspection reports within two weeks of the field effort.  The reports documented the condition of each tank, noted observations of potential concern, estimated remaining tank life, and made recommendations for maintenance and future inspections.